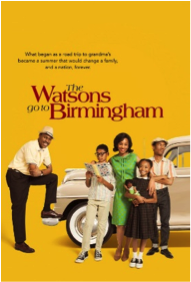 The Watsons Go to Birmingham

In the summer of 1963, Daniel and Wilona Watson and their three kids, 15-year-old Byron, 11-year-old Kenny and 8-year-old Joetta, leave their home in Flint, Michigan for a family road trip to Birmingham, Alabama. Daniel and Wilona are fed up with Byron’s juvenile delinquent antics, and have decided what he needs is a dose of his Grandma Sands’ no-nonsense approach. So the Watsons load up their 1948 Plymouth Brown Bomber and head south, with plenty of laughs en route. When they make it to Birmingham, they soon discover that life is very different there than in Flint – and not necessarily for the better. During that historic summer, the Watsons find themselves caught up in something far bigger than Byron’s troubles: events that will change their lives – and the nation – forever.