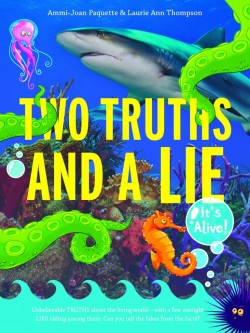 Did you know that there is a fungus that can control the mind of an ant and make it do its bidding? Would you believe there is such a thing as a corpse flower—a ten-foot-tall plant with a blossom that smells like a zombie? How about a species of octopus that doesn’t live in water but rather lurks in trees in the Pacific Northwest?

Every story in this book is strange and astounding. But not all of them are real. Just like the old game in this book’s title, two out of every three stories are completely true, and one is an outright lie. Can you guess which? It’s not going to be easy. Some false stories are based on truth, and some of the true stories are just plain unbelievable. And they’re all accompanied by dozens of photos, maps, and illustrations. Amaze yourself and trick your friends as you sort out the fakes from the facts!

Acclaimed authors Ammi-Joan Paquette and Laurie Ann Thompson have teamed up to create a series of sneaky stories about the natural world designed to amaze, disgust, and occasionally bamboozle you.

Ammi-Joan Paquette loves caves, hates mushy bananas, and is ambivalent about capybaras. She is the coauthor of the Two Truths and a Lie series and the author of the novels Rules for Ghosting, Paradox, and Nowhere Girl as well as the Princess Juniper series and many more. She is also the recipient of a PEN/New England Susan P. Bloom Children’s Book Discovery Award honor. Joan lives outside Boston, Massachusetts, where she balances her own writing with her day job as a literary agent. You can visit her online at www.ajpaquette.com.

Laurie Ann Thompson loves capybaras, hates caves, and is ambivalent about mushy bananas. She is the coauthor of the Two Truths and a Lie series and author of several award-winning nonfiction books, including Emmanuel’s Dream, a picture book biography of Emmanuel Ofosu Yeboah, which was the recipient of the Schneider Family Book Award and was named an ALA Notable Book and a CCBC Choice, among other accolades. She lives outside Seattle with her family, and you can visit her online at www.lauriethompson.com.

“Considering the fresh attention being paid to teaching a skeptical approach to information evaluation, this series opener couldn’t be better timed. A brief but savvy guide to responsible research methods adds further luster to this crowd pleaser.”

“An engaging, entertaining compendium that will inform and confound.”