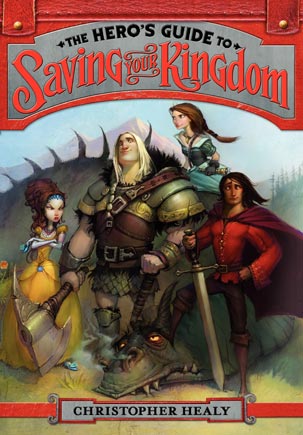 The Hero’s Guide to Saving Your Kingdom

Prince Liam. Prince Frederic. Prince Duncan. Prince Gustav. You’ve never heard of them, have you? These are the princes who saved Sleeping Beauty, Cinderella, Snow White, and Rapunzel respectively, and yet, thanks to those lousy bards who wrote the tales, you likely know them only as Prince Charming. But all of this is about to change. Rejected by their princesses and cast out of their castles, Liam, Frederic, Duncan, and Gustav stumble upon an evil plot that could endanger each of their kingdoms. Now it’s up to them to triumph over their various shortcomings, take on trolls, bandits, dragons, witches, and other assorted terrors, and become the heroes no one ever thought they could be.

Christopher Healy takes us on a journey with four imperfect princes and their four improbable princesses, all of whom are trying to become perfect heroes—a fast-paced, funny, and fresh introduction to a world where nothing, not even classic fairy tales, is what it seems. The Hero’s Guide To Saving Your Kingdom is the first in a series about Princes Liam, Frederic, Duncan and Gustav. If you love this volume, look for Volume Two, The Hero’s Guide to Storming the Castle, and Volume Three, The Hero’s Guide to Being an Outlaw.

“Healy’s fast-paced debut is overflowing with suspense, humor, and carefully developed characters. Healy injects age-old characters and fairy tale tropes with a fresh, contemporary sensibility, resulting in a crowd-pleaser with laugh-out-loud lines on nearly every page.”

“The fairy-tale world is tongue-in-cheek but fleshed out, creating its own humor rather than relying on pop-culture references. Healy juggles with pitch-perfect accuracy, rendering the princes as goobers with good hearts and individual strengths, keeping them distinct and believable. Inventive and hilarious.”

“One of the more clever, hilariously successful incarnations of the current literary rage to rip apart and rewrite fairy tales… The princes in “The Hero’s Guide” may not be charming, but Healy’s romp of a book about them most certainly is.”

“The premise is indeed charming…a quest that recalls at moments the Musketeers and at others, the Marxes.”