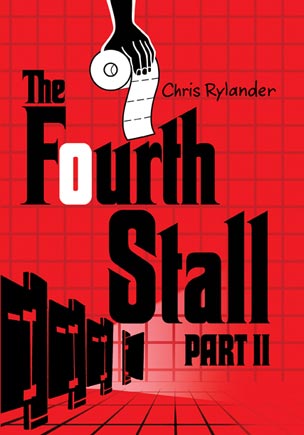 The life of crime is good. Mac has taken down legendary high school crime boss Staples, business has been booming and Mac and Vince are getting ready for middle school baseball tryouts. But this can’t last. Mac has always tried to keep his friends close and his enemies closer. But what happens when you can’t tell the difference?

A dilemma walks into the fourth stall in the form of Trixie Von Parkway – an eighth grader with a mean look and an even meaner predicament. Seems that the news science teacher is terrorizing her, and she needs Mac to get him off her back. Sounds simple enough, but as Mac starts to dig deeper, he finds even more trouble brewing at his school, including a new administrator bent on destroying his business and indicating that Trixie isn’t who she claims to be. The worst that could have happened to Mac before was that he might lose a little money, maybe catch a beating. In The Fourth Stall, Part II though, the stakes are even higher.

"Readers will be flushed with excitement to follow Mac’s operations from the fourth stall."

"Rylander uses the slow build to set the noir feel of the novel, creating an antihero protagonist who is hard not to like and respect. Fans…will not be disappointed."