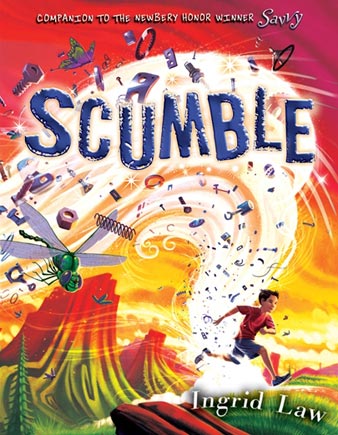 This birthday should have meant Ledger would inherit an amazing power—instead, he can break little things apart. But when the Kales decide to attend a family wedding in Wyoming, Ledge’s savvy grows to monumental proportions. Worse, his savvy disater has a witness: Sarah Jane Cabot, eagle-eyed reporter and daughter of the local businessman. Now Ledge must stop Sarah Jane from turning savvies into headlines, stop her father from foreclosing on Uncle Autry’s ranch, and start scrumbling his savvy into control… so that, someday, he can go home.

Ingrid Law has sold shoes, worked in a bookstore, helped other people get jobs, and assembled boxes for frozen eggplant burgers. She and her twelve-year-old daughter live in Boulder, Colorado, in a lovely old mobile home that they like to believe is a cross between a spaceship and a shoe box. They enjoy writing on its walls and painting on its ceiling, and have two harps, a flute, and a ukulele, as well as a fondness for muffins.