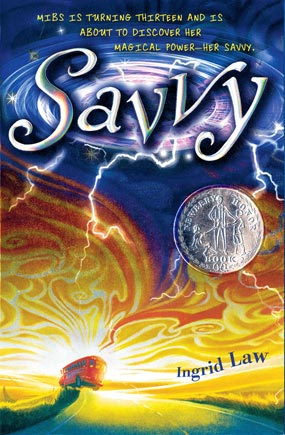 Mibs Beaumont is about to become a teenager. As if that prospect weren’t scary enough, thirteen is when a Beaumont’s savvy strikes – and with one brother who causes hurricanes and another who creates electricity, her savvy promises to be outrageous… and positively thrilling.

But just before the big day, Poppa is in a terrible accident. Suddenly, Mibs’s dreams of X-ray vision disappear: All she wants now is a savvy that will save Poppa. In fact, Mibs is so sure she’ll get that powerful savvy that she sneaks a ride to the hospital aboard a rickety bus – with her siblings and the preacher’s kids in tow. But when the bus starts heading in the wrong direction only one thing is certain: After this extraordinary adventure, not a soul on that bus will ever be the same.

Ingrid Law has sold shoes, worked in a bookstore, helped other people get jobs, and assembled boxes for frozen eggplant burgers. She and her twelve-year-old daughter live in Boulder, Colorado, in a lovely old mobile home that they like to believe is a cross between a spaceship and a shoe box. They enjoy writing on its walls and painting on its ceiling, and have two harps, a flute, and a ukulele, as well as a fondness for muffins.