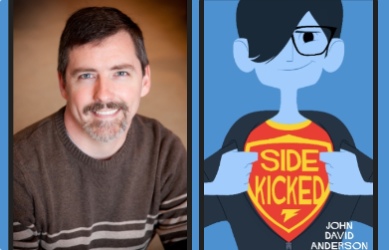 John David Anderson is the author of Sidekicked, in stores now!

Tell us a little bit about the book(s) you published with Walden.

Sidekicked tells the story of Drew Bean, a superhero sidekick with a lameoid power and a hero/mentor who can’t get off his seat long enough to save him because he (the hero) is carrying way too much emotional baggage. Drew struggles to find a space for himself in two worlds, facing the equally daunting trials of surviving middle-school and fighting crime simultaneously.

But that makes it sound like a Saturday morning special, so I will also say there are explosions and pools of acid and masked villains and epic showdowns (or near-epic, anyways) and at least one incident involving flatulence. Girl troubles, secret identities, samurai swords, sloppy-joe-avoidance–there’s a little something for everyone.

What brought you to Walden Pond Press?

The great thing about Walden is how much attention it pays to both its authors and its audience. As a smaller imprint, they make space for books to grow, and evolve, and find their readers. Writing the book is the easy part. It’s everything that comes after that is challenging, and the editors and support staff at Walden recognize cluelessness when they see it and compensate nicely.

What are middle grade books, to you, and why do you write for this age level?

Middle grade books are books that are too profound and imaginative for adults to handle. Essentially I think they are all coming-of-age stories: places where identities are shaped; moral codes are in flux; boys are still strange and gross, girls are enigmas, parents are forces to be challenged, yelled at, snuck out on, loved, hated, hugged, and accepted. School lunches are still horrible. Gym is still mandatory. And deodorant use is rapidly on the rise. It’s a great audience to write for because you don’t have to include vampires, witches, or dystopian dictatorships like you would in YA. But you also don’t have to know how to draw, which is nice, because my drawing sucks.

I like writing these books because I can still count on a sense of wonder on the part of my reader, but also because that is the age where I think reading as a hobby, as a lifelong passion, usually buries itself in the brain. It’s hard for the written word to compete in our digitally submersed society and I always get a spine-tickle when I see a twelve year old hunched over a novel instead of an iPhone.

How did your experiences growing up influence your writing?

I grew up? When? Why doesn’t anyone ever tell me these things? That doesn’t mean I have to get a job, does it?

What is the most challenging part of writing for children?

I actually don’t think of myself as writing for children, even though I realize the physical age range of my intended audience. I write to a certain mindset–the kind that appreciates a dose of fantasy and escapism but still sees tremendous power in fable and myth to reframe our experience into something meaningful. Not to say that my book does that. It’s just for funsies. But those of us with child-like spirits are more easily transported by the kinds of narratives that interest me.

I will say that dialogue in middle-grade fiction can be thorny at times. I try to listen in on conversations among tweens and teens to stay in touch with the lingo, but so many “conversations” nowadays seem to occur in text messages, which are harder to eavesdrop on. So to compensate I just use the word “dude” a lot, as in, “Dude, who is that strange man standing behind you trying to read your text messages?” See? Effective.

What were your favorite books as a kid?

My first literary memories are of Nate the Great, Shel Silverstein, and Dr. Seuss—a sucker for the canon. When I could handle chapters I gorged myself on fantasy: C.S. Lewis, Lloyd Alexander, Madeleine L’Engle. (In my day there was no such thing as Harry Potter. When we wanted our fantasy fix we grabbed our copy of Tolkien on our way to the outhouse in the snow and we liked it!) I was probably influenced most during my tween and teen years by satirists. Mark Twain and Kurt Vonnegut were huge. I read The Hitchhiker’s Guide books over and over again. Strangely I didn’t get into comics until I was in college (and yes, I had a girlfriend).

Now as a father of twins I of course have new favorites. Mo Willems and Nick Bruel tickle me. I dig the work of M.T. Anderson, and not just cause we share last names. That’s one of the perks of parenthood: the excuse to read children’s books. Kafka on the Shore was great and all, but sometimes you just want to dig into some Elephant and Piggie.

Do you visit schools to speak about your books? Do you Skype with classrooms? Where can interested parties find more information about setting up a visit with you?

I only visit the cool schools. The ones that somehow make time to read books for fun. And I am more than happy to transmit myself digitally for the ease and technological bewonderment of all parties involved. Anyone interested in setting up a visit is welcome to e-mail me at johndavidandersonauthor@gmail.com. (I tried johndavidandersonsupremedictatoroftheknownuniverse, but it was too long).

What are you working on next?

The laundry. And I have to make dinner. Did you know kids are supposed to eat three meals a day! Who comes up with this stuff?

I’m also currently working on several new writing projects, including a middle-grade novel that serves as a kind of juxtaposition to Sidekicked. Not a sequel, but a return to some of the same themes and concerns faced by Drew and his friends, except from the other side this time (everybody loves a good villain). It’s called Minion and it should find its ways to bookshelves in the wake of Sidekicked. Feel free to check out my website (www.johndavidanderson.org) for more information about my books and eating habits as well.