Sometimes You Have to Sit Down to Stand Tall

Bryce Clyde Jenkins plays Kenny Watson in The Watsons Go to Birmingham. In this personal essay, he recalls his grandmother’s experiences growing up in the segregated south. 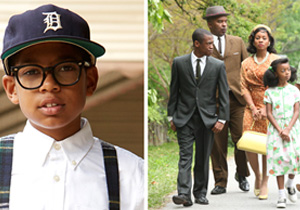 Hello, my name is Bryce Clyde Jenkins and I play Kenny in The Watsons Go To Birmingham. This is a special year as it marks the 50th Anniversary of the March on Washington, where Dr. King gave his “I Have A Dream” speech.  While it is important to honor Dr. King and other famous Civil Rights leaders, it also took thousands of small, but courageous acts made by everyday people to change hearts and minds.  I would like to talk about one of those brave people, my grandmother, Gussie Jenkins.

My grandmother was born in Cedartown, Georgia. When she was growing up, African Americans were not allowed to go to the same restaurants, stores, playgrounds or even the same hotels as white people.  When she wasn’t much older than me, grandmother and a couple of her friends went to Moore’s Drug Store to get some sodas one day after school. That was a typical thing to do as a teenager back then. But when they walked up to the counter and sat down by the soda fountain, the waiters ignored them. Then, my grandmother’s uncle came out and told her that she should leave or it would cause some problems. Moore’s Drug Store was only for white people. African Americans weren’t allowed to eat there or even sit down.

Although they were probably scared, grandmother and her friends stayed seated and said that they would not be denied service because of the color of their skin.  The tension rose when the manager called the police.  She and her friends weren’t arrested, but the police made them leave.

In The Watsons Go To Birmingham, my character, Kenny, experiences something very similar at a diner when he and his brother are denied service. But, this kind of treatment really happened to my grandmother. My grandmother said she had many experiences like this one in restaurants, bathrooms and even in schools. It makes me proud to know that she stood up for what was right.  She didn’t just give into something that she knew was wrong although she may have been afraid.  Her story gives me a greater sense of appreciation – appreciation for her, for Dr. King and lot of others who during that time defended the rights of all to be equal.

Can you imagine not getting served a burger just because you look different?  My grandmother couldn’t imagine it at a time when most people thought it was fine to treat other people so disrespectfully.   Through her bravery, grandmother taught me that sometimes you have to sit down to stand tall.