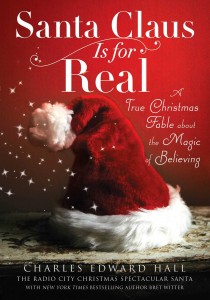 and Walden Media will develop Santa Is Real, a musical family film that will be directed by Stephen Chbosky, who helmed The Perks Of Being A Wallflower. Little Fockers scribe Larry Stuckey will write the script and Stacey Sher and Alexandra Milchan will produce with Walden.

Stuckey will adapt the upcoming book Santa Claus Is For Real: A True Christmas Fable About The Magic Of Believing by Charles E. Hall and Bret Witter, which Random House publishes next week. The film tells the story of Charles Hall, the man who plays Santa in Radio City’s Christmas Spectacular. A struggling actor when he took the job, the role gave him purpose and rescued Radio City, which has run the show as a perennial. Regency’s Pam Abdy and Walden’s Naia Cucukov, are overseeing. New Regency has Gone Girl in the marketplace with the Alejandro Gonzalez Iñárritu-directed Birdman about to premiere at the New York Film Festival. The company is currently in production on Iñárritu’s The Revenantstarring Leonardo DiCaprio and Tom Hardy. Walden Media most recently releasedThe Giver and teamed with Cross Creek on the Universal Pictures’ dramatic adventure/thriller Everest starring Jake Gyllenhaal, Josh Brolin, Jason Clarke, Keira Knightley, John Hawkes, Sam Worthington, Emily Watson and Robin Wright. Chbosky is represented by WME and Ken Richman from Hansen Firm.