Tomorrow marks the debut of Platypus Police Squad: The Frog Who Croaked by Jarrett J. Krosoczka, and we’re celebrating with a Tweetstakes! One lucky winner will receive a $200 gift card to his or her local bookstore, while five runners-up will win signed copies of the book and a PPS poster. 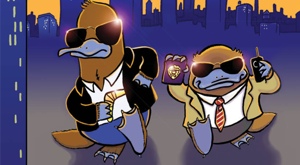 One winner will be chosen at random from all entrants at 12pm EST Wednesday and contacted via direct message or @reply on Twitter. The winner will then pick his or her local bricks-and-mortar bookstore from which a $200 gift card will be issued (provided store meets requirements included in the official rules).

For more about Platypus Police Squad, watch the book trailer below!

Good luck to all who enter! This giveaway is only open to US residents, 18 years of age and older. For official rules, click here. By entering the Tweetstakes you are agreeing to the official rules. Giveaway commences at noon ET on Monday, May 6, and ends at noon ET on Wednesday, May 8.