Movie Theaters in the 1960s

Harrison Knight plays Byron Watson in The Watsons Go to Birmingham. In this personal essay, he reflects on the simple pleasure of going to a movie, and how it once wasn’t so simple. 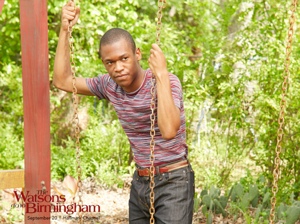 All of my life, I have enjoyed movies.  I enjoyed watching movies on TV, watching movies via the VCR, and especially watching movies on the silver screen.  As a matter of fact, watching movies on the big screen has become one of my favorite past time activities.  I love going to movie theaters because nothing is more enjoyable to me than seeing talented actors and actresses bring a script to life.  This is a source of relaxation for me so it even disturbs me when I have to stand in a long line in order to see a new feature.  I can’t even imagine not being able to frequent a movie theater or not being absolutely welcome at one.  Being from South Carolina, I am intrigued by its past laws and restrictions that existed before I was born.  I am amazed by the conversations that I have with my mother and my grandparents.

My mother reminds me that simple entertainment was not so simple at one point in the South.  Something as simple as attending a movie could be a humiliating experience for people of color.  My mother was a huge Beatles fan during the Beatlemania craze of this country during the 1960’s.  The Beatles had recently starred in a feature film The Yellow Submarine, which was extremely popular among young people at that time.  My mother was no different so she pleaded with her parents who reluctantly agreed to allow her and a young group of friends to be accompanied by chaperones to attend this feature.  They were ecstatic with the idea of seeing their favorite rock stars on the big screen.

Upon arrival at the theater, my mother and friends were confronted with one of those distasteful signs of the Jim Crow South.  They were able to enter the theater, but they were met by a sign that directed them to the “Colored” section.  They were required to ascend a stairwell, which took them to the balcony; this was the assigned area for people of color.  The area which they sat did not contain comfortable seating nor was that area as clean as the section on the floor designated for “White” people.  There was a major discrepancy in the total viewing experience.  They were forced to pay money to see a movie from a significant distance, while their counterparts were able to relax and enjoy their experience with comfortable seating and with a comfortable view.  My mother and friends were subjected to a dehumanizing experience, which regularly happened during this time period.  I cannot even imagine having to endure a situation as this.  I am so glad that the Civil Rights Act passed, and I am now able to attend movie theaters as well as other public arenas and be treated with dignity and respect.