The Giver hits theaters today, and leaders from the YA community are lining up to praise Lois Lowry’s seminal work. Check out some tweets and blog posts below! 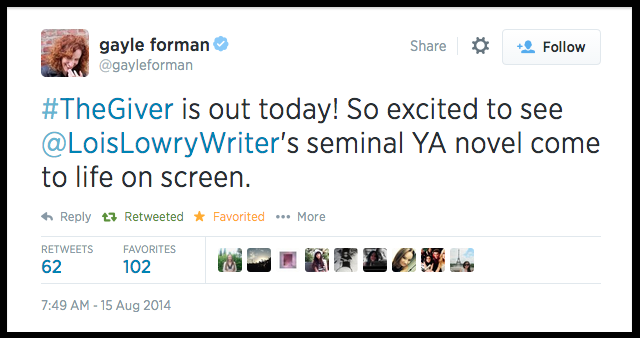 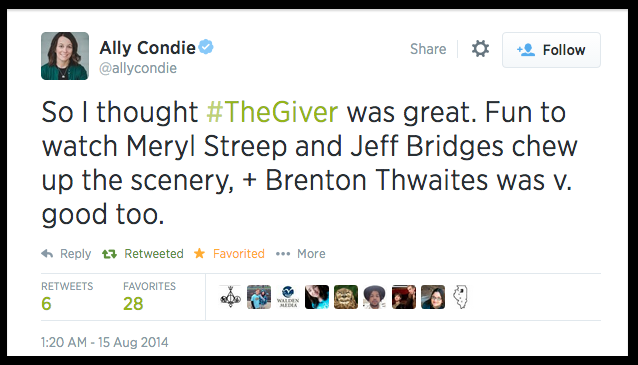 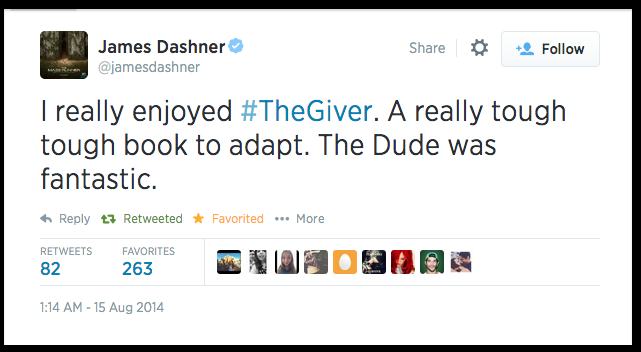 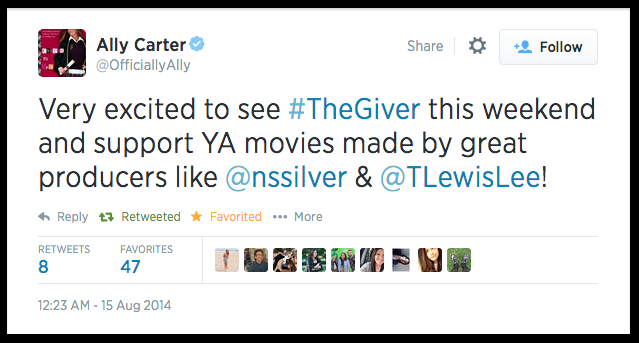 “This movie was one that surpassed my expectations. The modernization I feared that would ruin the movie, made the movie. With a recent rash of movie adaptation flops, The Giver is one that stayed true to the basics of the book. It made me feel the same emotions I had when I read the book, and brought those same thoughts I had while reading it to the surface while watching the movie.”

“As I mentioned above, all the thoughts and I feelings I had when I read The Giver where ones I had while watching the movie. Yes, some things are different than the book, but that is what an adaptation does. If done correctly, it captures the essence of the book, and changes some things to create a story that both fans of the story, and those who haven’t read it, will enjoy. Which in my opinion was done elegantly in this movie.

“This was a beautiful movie that conveyed the same powerful, and important message the book did.”

The Midnight Garden, YA For Adults

“I do agree with Lois Lowry’s statement that it stays true to its spirit. It doesn’t take the easy way out with the majority of the plot, and in many ways it expanded upon the themes and ideals present in the original story. The Giver came out in 1994, and Jeff Bridges first approached Lois Lowry about the possibility of a movie in 1996. It took 18 years to bring this project to the screen, and I have no doubt that the changes the filmmakers made to the story helped to make that possible. And as always, wouldn’t it be great if more kids and adults felt compelled to read the book because of the film?”

“If you’re willing to keep an open mind, this is a solidly entertaining film, and one that made some bold, and dare I say it, smart choices in translating story to screen.”

“The first time Jonas walks into the home of the Giver, I immediately fell in love with the spiral staircase and the shelves and shelves of books…At one point, in the movie, I realized that I had become wrapped up with what was on the screen. This was a good sign.”

“Though different in some ways, the spirit of the book is maintained in the on-screen version and maybe even expanded on a bit. So, what is my verdict and Jax’s verdict…It was worth going to see.”