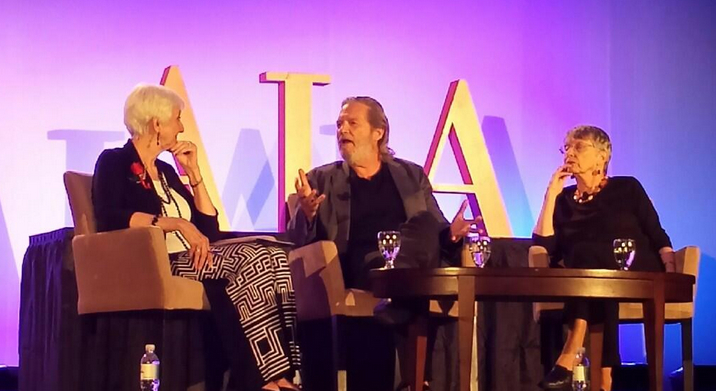 The American Library Association’s Annual Conference and Exhibition wrapped up today in Las Vegas. This is the premier library event of the year, bringing together innovators and influencers from all over the world. Lois Lowry and Jeff Bridges were in attendance on June 29th for a talk with ALA President Barbara Stripling. They discussed the 20th anniversary of The Giver‘s Newbery Award win, as well as the upcoming film adaptation coming out in August.

Crowds waited in line for upwards of 90 minutes, spilling into overflow rooms, to hear Lowry and Bridges address a wide range of topics including the importance of libraries and librarians, the “We Need Diverse Books” campaign, and the collaborative process of making The Giver  film. Both Lowry and Bridges expressed their vehement faith in the power of reading, saying that “reading is how we prepare for the brutalities of life. It’s something we need to do.” Bridges added that, in his opinion, The Giver is a novel that everyone should real aloud at some point in their life. In discussing the upcoming adaptation, Lowry explained to the crowd that a few changes were made to keep the film exciting, but she acknowledged that Bridges consistently advocated for the original text while on set; he often would exclaim, “Get back to the book! We have to stay with the book!” Lowry reported to be “very pleased with” the film, and both she and Bridges encouraged the audience to “go see The Giver on August 15th!”

Watch Lois Lowry talk about The Giver at the ALA Conference:

Watch Lois Lowry talk about Libraries Past and Present: