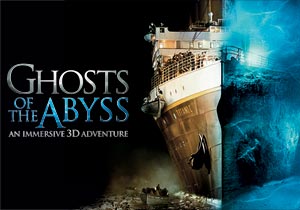 Ghosts of the Abyss Giveaway

Ten years ago this month, we released the documentary Ghosts of the Abyss, produced and directed by James Cameron. The film follows Cameron and a team of scientists as they return to the wreckage of the RMS Titanic in a pair of mini-submarines to undertake a meticulous exploration of the doomed vessel’s ruins.

Using technology specially developed for the expedition, Cameron and his team were able to explore virtually the entire wreck, capturing detailed images of the once opulant oceanliner’s remains. Footage from the wreck is combined with CGI recreations of the Titanic as it originally appeared, providing a stunning before-and-after picture of the supposedly “unsinkable ship” that claimed 1,502 lives when it went down on April 15, 1912. After more than 100 years in a watery grave, the legendary Titanic remains a source of intrigue and fascination today.

In honor of the 10th anniversary of Ghosts of the Abyss, we’re giving away 10 copies of the movie on DVD. Click here to enter.