Dora and the Lost City of Gold has four nominations for the 2020 Imagen Awards, designed to recognize Latinx talent in the entertainment industry. These four nominations makes Dora a top nominee of the year, alongside Law & Order: SVU, Little America, One Day at a Time and Queen of the South.

The Imagen Awards were established in 1985 from a suggestion by veteran television producer Norman Lear to encourage and recognize the positive portrayals of the Latinx community in media. Later, the Imagen Foundation was developed as a national nonprofit dedicated to increasing Latinx representation at all levels in the entertainment & communications industries.

The 35th Imagen Awards will be presented virtually on Thursday, September 24th at 5 pm. 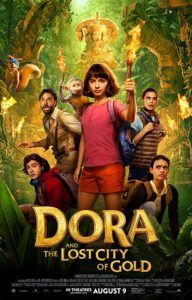