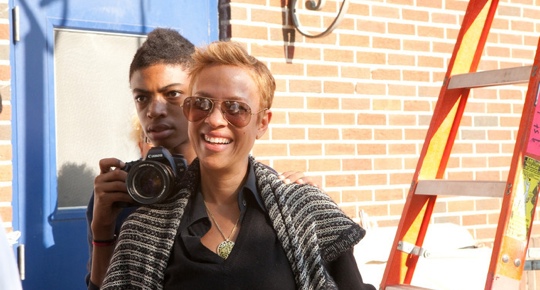 I first encountered The Watsons Go to Birmingham-1963 when I was looking for a book to read to my children that featured a family that closely resembled ours.  I read the story to my young son and daughter and we laughed out loud, cried a bit and then had an important conversation about America and some of its difficult past.  The characters Christopher Paul Curtis created stayed with me and were so vivid they were practically begging me to bring them to life…on the screen.  As a screenwriter, I was excited to give the spirit of Christopher Paul Curtis’ narrative a visual life especially capturing the lively family dynamic.  I also wanted to give the viewer a sense of what life would be like in Birmingham Alabama in 1963 and to showcase how families tried to protect their children and manage living in the segregated south.  Of great importance, was to pay homage to the foot soldiers of the Children’s Crusade of Birmingham, Alabama.  They truly showed the world that through non-violence, when young people stand up for what they believe in, together they can change the world.  Finally, it was pivotal that we recognize and acknowledge; Addie Mae Collins, Denise McNair, Carole Robertson and Cynthia Wesley who perished in the 16th Street Baptist Church bombing.  While that act of terror took their lives and destroyed lives of many others, their ultimate sacrifice galvanized a nation to finally work to make all of America truly equal.

While it has been fifty years since the events that took place in 1963, it is critical that we remember our history.  It is important to understand where we came from to understand our present and to make sure we are moving forward.  In many ways we have made great progress, but the march continues and it is imperative to root out injustice wherever it may be.

Ultimately, The Watsons Go to Birmingham, the book and the film, is a story of love…love of family, love of community, love of country even in the face of monsters.

Thank you Christopher Paul Curtis for giving us this beautiful story.