Your favorite baby-sitters are back! 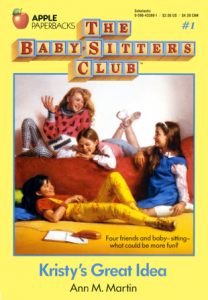 The BSC is back and headed to Netflix! The streaming giant has ordered 10 episodes of this live-action, family-friendly dramedy series based on the beloved books. The half hour episodes will be focused on the relationships and adventures in baby-sitting of five best friends in Stoneybrook, Connecticut.

“I’m amazed that there are so many passionate fans of The Baby-Sitters Club after all these years,” author Ann M. Martin said, “and I’m honored to continue to hear from readers — now grown, who have become writers, editors, teachers, librarians, filmmakers — who say that they see a reflection of themselves in the characters of Kristy and her friends. So I’m very excited about the forthcoming series on Netflix, which I hope will inspire a new generation of readers and leaders everywhere.”

The show will focus on the themes of female friendship, entrepreneurship, and empowerment that were so resonant to fans of Martin’s classic books, while also tackling more serious topics such as racism, divorce, and belonging, and other relevant issues facing teenagers today.

“The themes of The Baby-Sitters Club ​still resonate 30 years after the original book series was released, and there has never been a more opportune time to tell an aspirational story about empowering young female entrepreneurs,” said Melissa Cobb, Vice President of Kids and Family at Netflix. “Together with Ann M. Martin and the team at Walden Media, our ambition is to contemporize the storylines and adventures of this iconic group of girlfriends to reflect modern-day issues.”

“For generations, young people have been captivated and inspired by the enterprising young women of The Baby-Sitters Club,​” Walden Media CEO Frank Smith said. “Bringing this iconic series to life comes at a pivotal moment in Walden’s expansion into scripted televised content. We are honored to be part of this special collaboration with Ann M. Martin, Netflix and Michael De Luca.”

Stay tuned for more information on this exciting project as it develops!