A Conversation With Lois Lowry 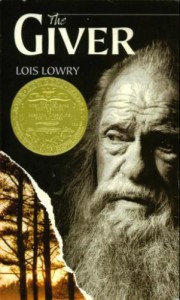 Lois Lowry participated in an exclusive interview this week with some online media outlets including The Young Folks, Shelf to Screen and POPSUGAR. Read an excerpt of the interview below!

“What part of the film are you most excited for long-time fans of the novel to see?”

“I haven’t seen the completed film, I’ve seen it in progress. I have to stop and think. Oddly enough, the character member that stands out the most in my mind is amazingly the baby. There are moments when the baby, Gabriel, steals the show, and he was played by baby twins so I don’t know which twin I was looking at when I caught my breath and said, “Wow.” But there’s a moment in the movie when that baby, who is crying, then stops crying and looks up and listens, and it’s just a wonderful moment. The movie is filled with wonderful moments and wonderful performances by every single one of the actors in it. One thing that isn’t in the book that is very touching in the movie is the relationship between Jonas and his friend Fiona. It is in the book, but in the book they’re younger (12), and in the movie they’re teenagers. So even though it’s not a big smushy romance, it’s a very touching portrait of what could have been, even though it has to end when Jonas goes away. 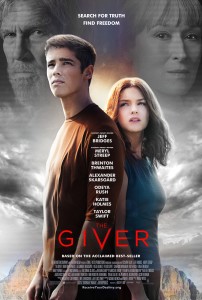 “They’ve aged the main characters. Before the studio made alterations like that, did they come to you for feedback or your thoughts?”

“In many cases, they came to me to ask my opinion and advice about things, and they didn’t have to do that so I was very grateful and gratified that they did. The age was decided without my input and I’m not sure why they decided to do that but it seems to have worked well. I think people who enter the movie thinking ‘Oh darn, they ought to be twelve,’ are going to forget that thought very quickly, because the performers, Jonas and Fiona and Jonas’s friend Asher, are so good and so good together. I think, aside from the little hint of romance, some of the things they do are things that twelve year olds wouldn’t be able to do, so probably it was appropriate to make them a little older. And it works just fine. And of course Brenton, who plays Jonas, is going to be a real heartthrob for teenage girls.”

“Did it feel surreal when the movie started being put together?”

“It doesn’t feel surreal. I’ve been involved for the past year watching this come together and turn in to something. It’s been a very interesting, fascinating thing to watch, but surreal would not be the right word. It’s very real to me and I love watching it happen. I just hope that when it’s out there, when the movie opens and the audiences see it, I hope they’re as thrilled as I am with it.”

Read the entire interview at The Young Folks, Shelf to Screen, and POPSUGAR!